Eleven years have passed. Numerous lives have changed. Thousands left the world leaving millions mourning behind. Yes, eleven years have passed. I was twelve then; free spirited, inconsiderate and casual. When I first heard about the 9/11 attacks, I couldn’t care much. I could see everybody glued to the television, following the story conscientiously about a massive attack that happened in America, where I had never been but had only dreamt to be, someday. I sat down on the couch to scrutinize whatsoever was happening. Gradually and eventually, it started to have a bearing on me. Day after day I watched all the news stories in relation to the attack. I noticed how people died: in the flights, in the World Trade Centre, in the Pentagon, on the roads when the buildings collapsed. I saw how the victims jumped from the uppermost floors to escape the smoulder. Everything ended in a matter of a few minutes. I could sense the trauma, the pain, the revulsion. And I could do nothing but hate the very existence of that something called ‘terrorism’ which I had never evidently understood before. All I could do was pray. And believe me, I did that a lot.

The attacks and those visions could never really leave me. It got stuck somewhere deep within my soul because it had hurt me. Today, when I recall that day and the days that followed, I can perceive so strongly how it would have been for the people who went through it all; for the mothers who lost their young children, for those kids who lost their parents, for the men and women who lost their other halves; for everyone who loved and lost that love to something as immaterial as violence. 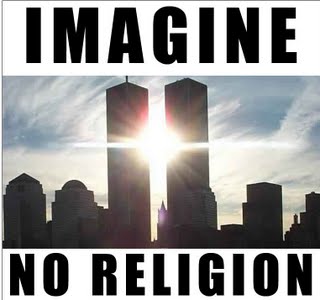 Religion never meant anything as immense to me as was portrayed after the attacks. I am a Hindu; studied in a missionary convent school which made me almost half Christian; have a number of Muslim friends and follow most of the rituals of Sikhism. After the 9/11 attacks, the world somehow distorted. Americans were filled with vengeance, which was totally acceptable; however those verbal and physical assaults on innocent Sikhs and Muslims could never receive the justification that they harbored. The world became a battleground because the motive of the 9/11 devastation was religion and nothing more than that. I cannot deny the fact that all of this petrified me as well. Whenever I heard the word ‘terrorist’, I could only think of the ‘Al-Qaeda’ and I loathed them. I hated them for widening the religious divide in the world. I hated them for destroying lives and being proud of that. I hated them for considering this as the mission ‘God’ sent them on earth for. They literally believed that this transgression would secure them a place in heaven. And I hated them for this and all they said or did.

Years passed but 9/11 could not be forgotten. Then, in May 2011, news shook the world regarding Osama Bin Laden being seized and executed. That very day my admiration for the USA increased manifold. They had achieved what they intended to. I watched the documentary of this entire operation aired on the National Geographic and after every few minutes I kept saying to myself-‘They did it.’ They did not desire to be the mere spectators of such an event which literally shuddered their being. They fought back. And this unquestionably makes them a superpower.

Its 9/11 today; the Americans have tasted both defeat and victory. But, how have the last eleven years changed the world? The impact of those attacks is still alive. The disgust towards ‘the other religion’ still prevails. Moreover, I am assured of the existence of many militant groups, racist individuals or religious sects who might be preparing for another act of bloodshed in the name of God. This has been happening and this will go on. Why couldn’t the last eleven years transform the perspective and beliefs of people? This must be perhaps because it is not plausible to put out of your mind an incident as colossal and devastating as the 9/11. So, I say, do not forget the 9/11 since it is worthy of remembrance. Do not forget those 2977 lives which got erased from the world so easily. Do not forget the destruction, the twinge or the tears. Nonetheless, the most significant ideal here is: ‘Do not forget humanity.’ 9/11 taught us that. And in the present day, looking back at the last eleven years, we can apprehend that violence can never achieve victory. What really brings about the actual revolution that we wish to see in this world is the love for humanity. For this moment I thank 9/11 for teaching me a beautiful lesson.