The protests in Syria have been inexhaustible since the past 19 months. Approximately 30,000 people have lost their lives in this civilian war against the country’s dictator Bashar-al Assad. I always wanted to write something with reference to Syria’s condition and the story behind this mass uprising, however, I could not work it out because of the massive reports, issues, attacks and discussions hovering in and around the country. Syria’s conflict can definitely not be covered in an article or even in a collection of articles with ease. I might someday talk about it at more length but for today, I present you with this piece of writing which appeared in The Guardian recently. This write-up by Jonathan Freedland discusses stuff that makes one think- Why is there no or less western intervention in the Syrian conflict and why are the western countries not trying to throw out Assad’s rule and wrestle against his repression. 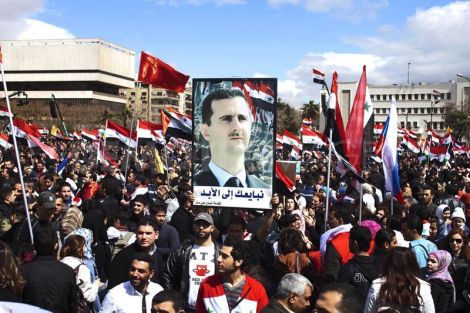 This battle needs more consideration and reporting than it receives because it is concerned with humankind and the loss of hundreds of lives every day. If you still do not know about the oppression faced by the Syrian public, I would say: Read about it because there are thousands of people like us who are suffering at the hands of a tyrannical autocracy. For now, read the article below. Also, if you need more insight into the Syrian story, do report to me. I would love to do some articles on the same if the readers wish to know more.

2 responses to “The Syrian Uprising!”